Holy crap I think I chucked back a British record!!!

It's been busy for me fishing wise the last few days; I have fished two rivers hundreds of miles apart and it has had its ups and down, but honestly all the effort has been very worth it as I have landed some some superb fish, one of which was small but turned out to be a real heart breaker!
The Avon still seems rather stagnant as it awaits a good flush through, which has to come sooner or later. In the meantime it's a case of going when you know you stand the best chance of catching. So Sunday I picked Jeff up well before dawn to drive down for a session.
For me it was all about Barbel/Zander and looking for one in the wake of the other. I was a little unsure if the zeds would have a go in the early morning as I am currently of the thinking that they feed hard at last light and taper off through the night, but the Barbel seem to revel in the dark, so the chance of a searing yank was always on the cards as long as the moon was out.
Turned out the Zander did have a brief feeding spell just as the sky lightened, where from three bites I landed two minters, the first of 2-3lb and a second of 5.4lb. 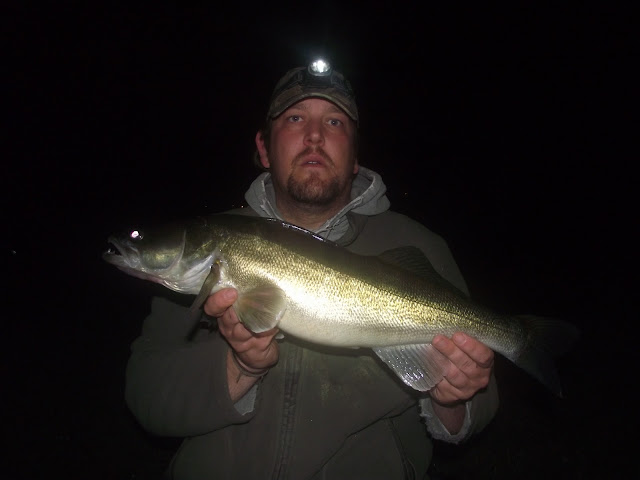 The sun came up all to soon and the Barbel never showed, but through the morning my deposits of halibut ground bait and pellets attracted the bream on mass. Four nice chunky fish graced my net and three got away but all were welcome whilst I waited for the no show Barbel. 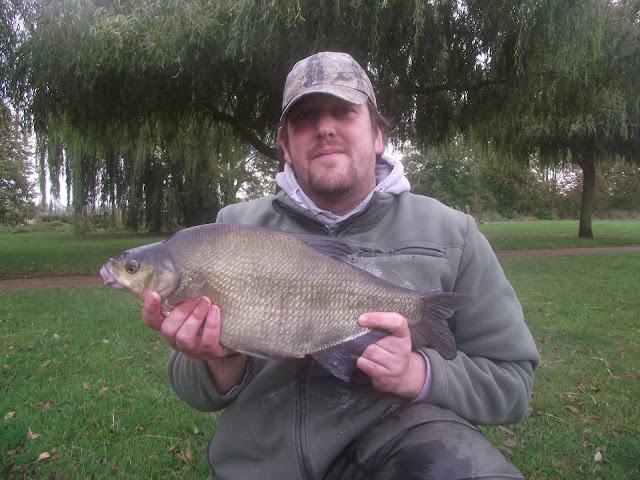 For once the Avon seemed to perform rather consistently. Either that or after spending the whole season so far fishing poor conditions I am getting used to it.
Tuesday I again picked up Jeff in the dark. But this time we bypassed the Avon and headed south to the theatre of dreams where in the company of many other anglers just as keen as ourselves, we would again cast lines into the resplendent and ever giving river Itchen.
The Itchen changed the bar for how good rivers can be for me. On my first visit last year I had no idea of what it was like so therefore I flitted around trying to do everything on one day. This year I knew the crack and had a plan.
On my first visit I had enjoyed the beautiful art of long trotting for most of the day, but as enjoyable as it was, it was overshadowed when the devastatingly efficient of the maggot feeder had been deployed by myself.
When I left that first time there was no doubt in my mind that although the catch rate was the same for both methods the feeder yielded much bigger fish. So this time this was where I would begin.
Once everyone had touched base at the bottom of the fishery they all headed off upstream, all except myself and Jeff, who also had intent in mind. I headed straight for the ugliest swim on the entire fishery, plonked myself down and began hoofing in maggots by the Drennan feeder load. It took all of two, maybe three seconds, for me to get turned over by a unseen fish so heavier hook links seemed in order straight away.
All morning I had a queue of fantastic Trout, small Grayling and Chub ready to gobble my baits down with unabated gusto and every one was picture perfect... 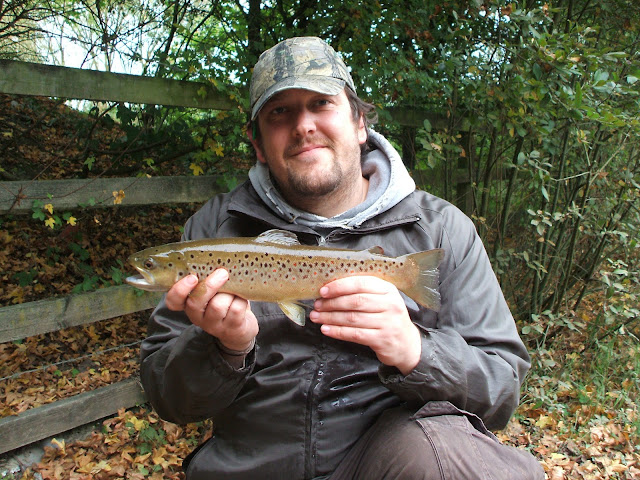 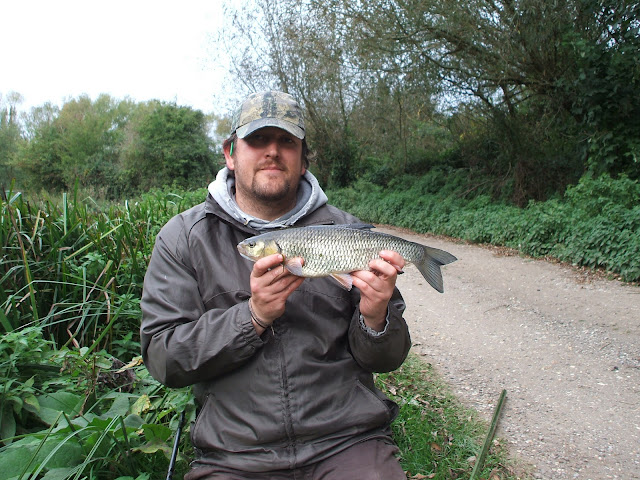 I thought the highlight of my session was when my rod tip buckled over and I made contact with a Salmon which after shedding my hook performed some brilliant zigzagging jumps defiantly up river in front of me. That was until the bites petered off and just as I began packing up to move my rod went again. At first I thought another trout or chub had taken my bait as the light rod arched over, but when it swirled in the water like a Grayling I knew my first new PB of the day was close to the net. 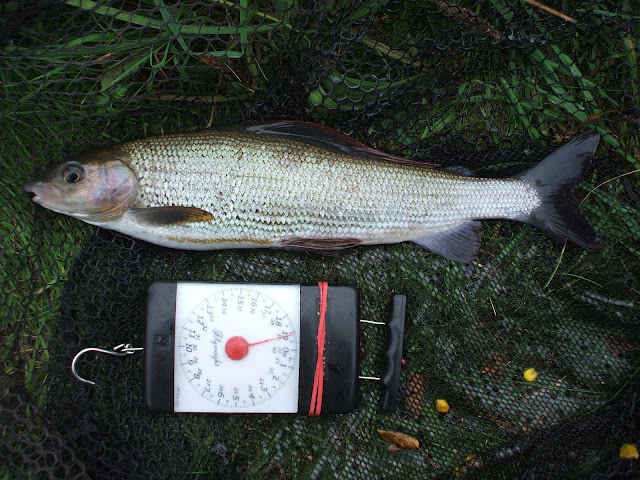 When I first saw it on the bank I truly thought it was going to be 3lb but the dial eventually confirmed it was a PB at 2.1lb. Interestingly it coughed up a load of corn and the only person within any range of me upstream was Jeff whom when asked confirmed that he hadn't feed any corn, so where it got that was anyones guess.
Around noon I migrated up stream to lunch by the anglers hut. Whilst awaiting Mr Hatt to arrive and brew the tea I slipped into a swim after very polite gent who was off down stream. I could have done some trotting but the previous angler had been running baits through for a few hours so I threw the feeder back out.
Straight away the fish were onto the bait and after ten or more Grayling up to 10oz my first trout crashed the party, cartwheeling around like a dervish. Now I am no expert in trout but this one looked different from all the others I had encountered, which lead me to question whether it was a brownie or a small sea trout. If anyone has an opinion please feel free to comment. 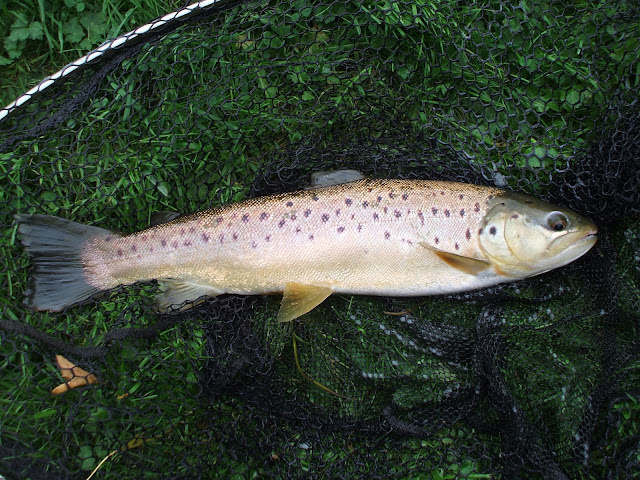 The next trout that turned up was a real kipper which absolutely refused to come to my bank no matter how much pressure I put on it; but when I did finally land it, what a fish it was! A chunky cock fish with a well formed kype and an attitude to boot. This fellow was king of this swim for sure and my second PB of the day. 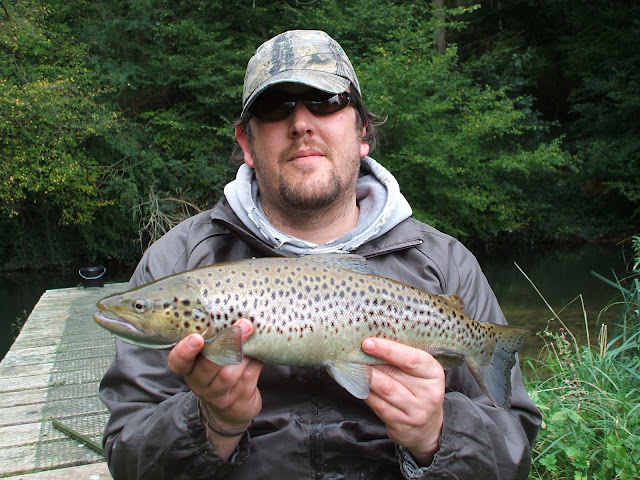 My biggest suprise of the day came from one of the smallest inhabitants of the river. A slow and tentative bite produced what I first thought was another little Grayling which turned into the mother of all Gudgeon which was as thicker than a sausage. In all my life I have never caught a gudgeon half the size of this one. It had to go on the scales. I remember thinking 'oh 6oz thats a big gudgeon' as I photographed it then plopped it back in. 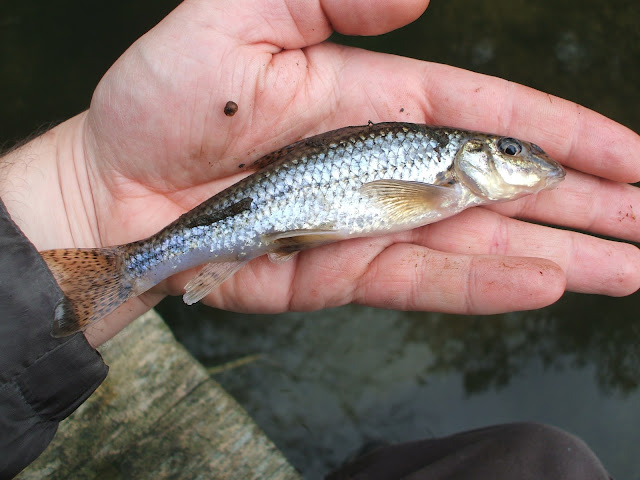 Then when a chap called Danny turned up. When I explained my capture he told me the records only four something which straight away put doubt in my mind. He then suggested that it could have been a baby Barbel which apparently can look like gudgeon when there are juveniles. But when Jeff turned up we all looked at the picture it was confirmed gudgeon again.
Now I know that weighing small fish on over gunned scales it not that accurate so when I got home I first took a picture of my hand with a tape measure to show how long it was. 7" is a impressive length for a gonk! 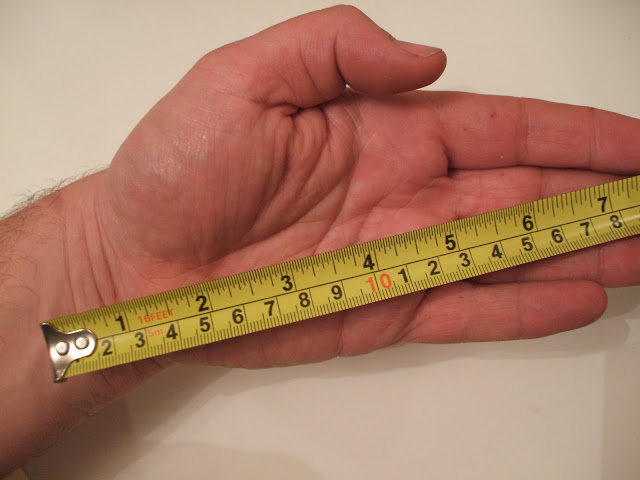 Then at work I checked my scales against some high quailty certified comercial scales and found that yes they are not perfect at low weights, but on every anttempt the 6oz mean weight came out between five and six ounces. Foolishly after this I checked out the offical record online and found out it was 5oz dead. Yes I am gutted! If only I would have called Jeff up who had some relative scales I could have been contacting the british records committee about submitting my application, as well as getting another PB.
After lunch and spending a few hours mooching around some pools near the hut I again headed back down river prompted by other anglers descending. My reason for this was to get a spot on the weir at the very bottom of the fishery, which contains every type of fish from salmon  to carp. Happily I was the first on it and bagged a prime spot where Keith had landed a small barbel first cast this morning. 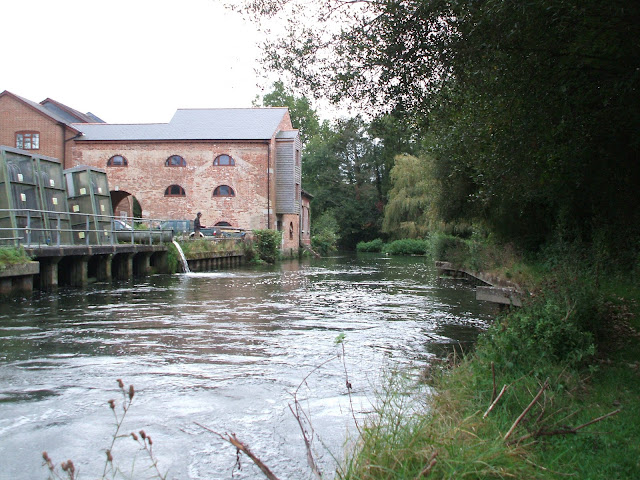 Having a load of maggots left I set up a heavier feeder set up and went to work running out my bait. I was hoping catch a nice Roach or a Barbel but nether got onto my slew of bait. But this is the Itchen so although what I wanted never turned up I caught plenty of fish. Grayling, salmon par, and eels all grabbed at my bait in the turbulent water. 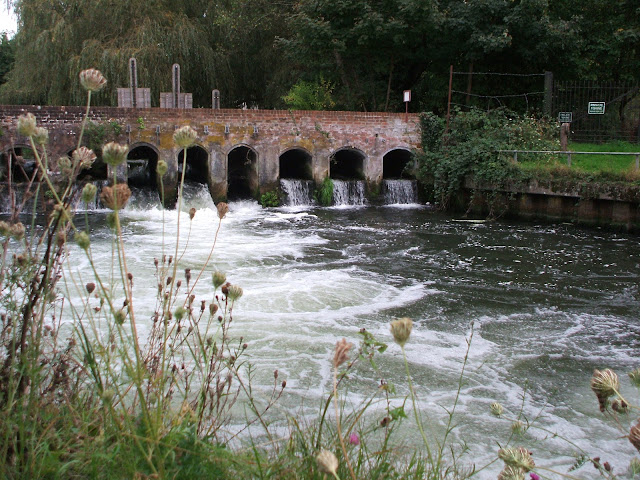 Eventually I ran out of maggots which was shortly followed by the corn too. So with only one option left I started with bread. My first fish on bread was an eel of a pound. The second fish I never would have thought would touch a big gob of white stuff, though I am not moaning as it was the most spectacular trout I have ever caught in my life. 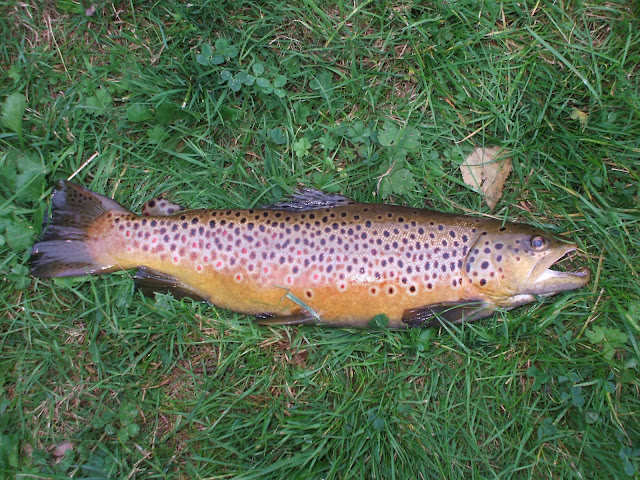 As always we left under the cover of darkness in a daze of grayling and trout plus a hint of sorrow that I never checked that little giant out before casually tossing it back. I think now after my second visit to the Itchen I can without a doubt say this is one of the best rivers in the UK.
Posted by Daniel Everitt at 11:36