People call football the beautiful game, in my opinion though fishing is the beautiful pastime. I suppose that's because as anglers we so often find ourselves looking out over wonderful scenes of water framed by the resplendent countryside through ever changing seasons. Even the most horrendous urban or industrialized vista has it's moment when the sun rises, mist clings to the water and you can see past the scars of man to feel like you're in the most wondrous place on earth.

I have always tried to see the beauty in what I am doing or where I am fishing, and in most cases even if I am not enjoying my surroundings I will glimpse a moment in nature that satisfies my need for visual romance, even if that's something so small as watching a wren busying about its business along the bank or a rash of seasonal blooms it still makes being out worth it for me. My last session though... well I didn't really feel it.

Not wanting to fall into that age old English tradition of whinging about the weather, I am feeling a little hard done by with this damned incessant avenue of Atlantic weather fronts that seem to endlessly pile in. I know it might seem churlish given that some people have been flooded out for Christmas, but every time I seem to get the opportunity to get out, the weather has either been, or is, crappy and this last session took the biscuit.

To cut a long story short it was cold and raining when I left the house and was so the entire time I was out. Now given my recent proclivity to mobile angling and the fact that the canal was in perfect condition to wang a few lures around, really I should have chucked caution to the wind, manned up and got wet. But I didn't and with still more worms left over from a session a week go I naively came to the conclusion that I could ply them on the canal and catch hopefully a few more zander to get me closer to my target for the year.

I didn't take me long to get pinned down by the rain. Having a chair, umbrella, rod bag, and all the extra tat I seem to take when having a sit down session only served to stop me from moving, even though I was sure other spots would produce. As a result I ended up spending four wasted hours hunkered under my umbrella targeting a patch of bait off the marginal shelf.

Worst of all was the knowledge that my presence under fifty inches of skyline changing of nylon was not helping my cause in the clear water. The result of which was me catching very little from an area full of fish. Literally in the entire time I sat shivering on the tow path I reaped no more than a few mediocre perch which were confident enough to drift onto the bait. To catch those I had to do something that for me is unheard of nowadays and scale down. Anyone who as ever fished with me on the canals knows I am all about the attack and as a result my gear can be described as robust. So dropping from 3.2lb line straight through to a size six hook to 2lb hook links with size 16 hooks is like pulling teeth for me, and it didn't do any real good anyway.

That was until I rolled the dice and chanced one last attack to try and vilify my efforts. After depositing the last of my worm onto the spot just as the first barge of the day passed by, I decided to give it forty-five minutes more. By fishing a lob tail dead depth I suddenly started to get some very subtle dips on the float. It might sound insane but sometimes when fishing worms, especially lob worm, on a light rig I reckon that the worm writhing around or into something has pulled my float under slightly. Not wanting to disturb any would be biters striking at a worm bite I waited until I was sure this was a fish. Turns out it was and after a sprightly scrap large and rather perfect roach was on the bank. 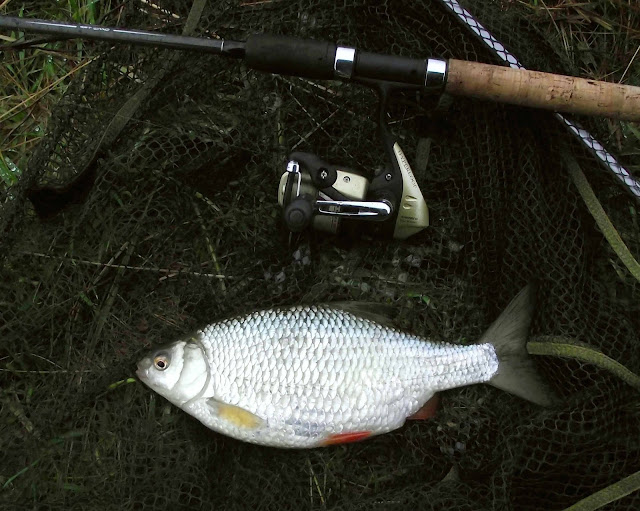 After that I'd had enough of the cold wet weather and packed up and went home. The End