With the summer just about here and the plethora of lure matches drying up I can feel the weed festooned lakes calling me. Soon I will able to think of nothing but tench and crucian carp but before it gets too hot I really want to do some surface fishing for pike. Since diving head first into the world of lure fishing I have become somewhat obsessed by that exhilarating moment of the hit. Unlike the slow motion moments of excitement when a float comes to life, the shear savageness and raw anger of a hard hit as a predator falls for your rouse is truly exciting. Take that moment when an unseen fish hits your lure and add to it a fleeting moment of chase with the visual stimulation of a wake appearing behind your bait as something follows to attack and you realise this is even more exciting that the hit. Surface lure fishing is, if you will, hit plus or hit turbo, whatever you chose to call thrill served with a side of excitement.

I am lucky enough to be able to fish a lake festooned as much with Jack pike as it is with lilies. The water is shallow and clear. The pike love to linger amongst those pads locked and coiled to attack and prey that drops it guard. And for my part I have a box full of tricks I hope to use to trigger attack from pike that think my fakery is a panicked duckling seeking its mother, a struggling frog desperate to climb atop a pad, wet rat heading for its burrow, or an injured fish struggling on the surface. 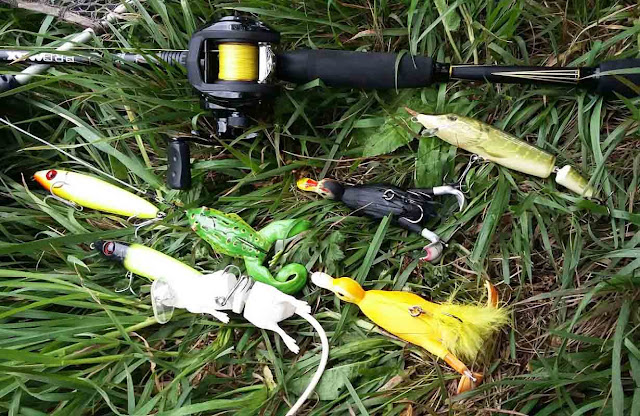 Theory and practice as always are two very different things. After arriving early amongst the pines flanking the country estate I worked several fruitless areas where I was sure pike would be hanging out and all I had to show for it was a few puffs of silt where some bog eyed jack had gone off half cocked, missing the lure by metres rather than feet. Things weren't looking good until I followed the wind to a long line of pads emanating from an island, where all hell broke loose. My first cast sailed right over and the rubber frog attached splashed into the ripple beyond. A few turns of the handle and two Jacks burst from their layers charging in for attack. The first one missed but the second smashed so hard into my lure that it literally tore through the rubber skin. A head shake and it was gone... but this was just the start. It took several casts and multiple hits before the hook bit home in one of the teeth filled mouths. From what I could tell they actually seemed to be targeting the lures legs, shaking the lure from side to side and my strikes were pulling the lure from their grasp. All it took was a slower strike and they were soon getting hooked. 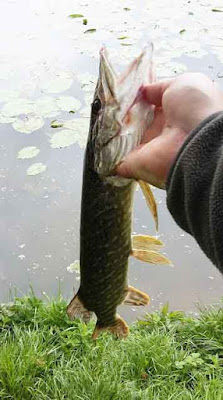 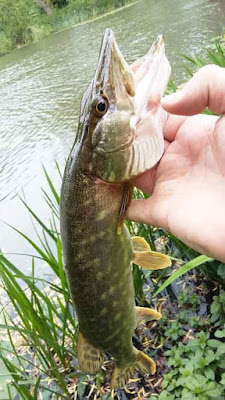 Weirdly of all this massive old lake they could be in, most of the resident pike seemed to be focused on this one quiet corner. Of all the possible explanations for this I think the most likely is that combination of prey following the wind and the thick cover had combined to switch the resident pike into feeding mode. The area probably held no more predators that any other tennis court size section of water, it's just that these were in feeding mode and others probably weren't. Whatever the reason the for their aggression they repeatedly attacked in various different ways from bursting out of the shadows to oddly almost sucking the lure of the surface.

None of the fish on this occasion were particularly large as ninety percent of the pike in this lake are sub six pounds but what they lack in size they make up for in eagerness. The savage gear 3D reaction frog turned out to be the lure dujour and even full of holes and sinking at the end it still got the interest of these sharp eyed little predators. 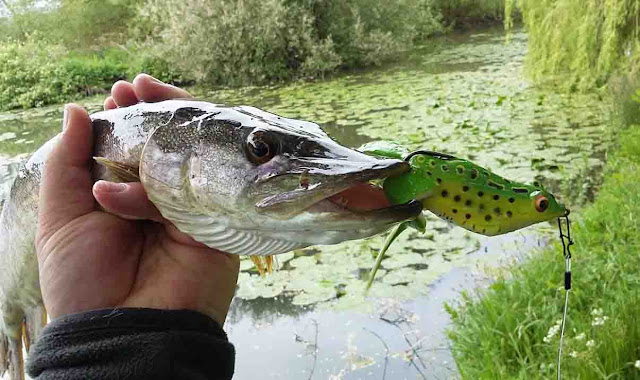 I had so much fun flinging these surface lures around that I can't wait to try this out on a host of other waters including the rivers once they are open and when the weather conditions are favourable and the pike are ready to strike!